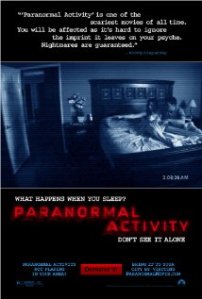 With Who: Just Me

Why: Wanted to know what the fuss was about. Plus Netflix has the first two on streaming.

Just in case you have no idea what this movie is about, click here.

What you won’t find a lot of during the course of this challenge is Horror Movies.

Frankly they’re usually not the best piece of filmmaking available. I don’t find them scary and in most cases they are just down right laughable.

How many times does the dame fall while running from the big bad guy with the claws or the chainsaw?

How often do unarmed guys try to be bold by going outside with nothing more than big eyes and a half of a brain to find out what that loud noise was?

Or how often do they yell out “who’s there?” to the noise outside or a noise downstairs? As if whatever is out there is going to answer.

In this film’s case I give it a pass though. Because to me it doesn’t seem to be intended as a horror flick. I think it was more supernatural, and I think there is a big difference. Supernatural isn’t always scary. It’s sometimes just, well of naturally super capabilities. You know, out of the realm of human understanding.

Of course there weren’t a lot of scary parts in the film. I believe that to be intentional. They were more like “whoa, that’s crazy” moments. Or maybe that was just the way I took it. Remember, I don’t find movies to be scary.

But I understand horror flicks are good business. That’s why there is a Paranormal Activity 4 on the way. Look at the many horror franchises that have spawned many sequels; Friday the 13th, Nightmare on Elm Street, Halloween, Saw, Child’s Play, and now apparently Paranormal Activity. They are cheap to make, people like them, and a story about something you either can’t kill or can’t keep dead has the possibility to go on forever.

I knew nothing about this film before watching it. So I was surprised to see the famous Blair Witch Project format of, a) presenting the entire film through the eyes of a home video camera, and b) using the actor’s real names in the film.

This was intended, I presume, to give the film authenticity. To make it seem like it was real.

I would imagine this was also the reason there were no credits. Whoa! Scary.

Of course I couldn’t understand why they only used the real names of the main two actors, while anyone else in the film used a character name.

I’ll watch the second one probably tonight to see if I like it any better. I saw that there is a third one on dvd so I will have to finish the series because that’s how I’m made.

I did like the ending of the first one although, as I stated, it did confuse me as to what happened the rest of the film. But I like plot twist endings.

On a side note, today marks the last day of the first quarter of the year, and now with this 15th film of my 60 film challenge I am a quarter of the way done. Niiiice.